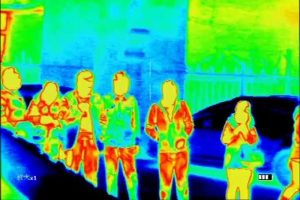 The weird, the wacky and the wonderful…

Just as World War II spawned numerous inventions, so too is the global war against Covid. From wristbands that buzz when you’re about to touch your face, to heat seeking helmets, sanitising robots and heart rate monitoring drones and on to the ‘Kooty Key’ (a hook used to push buttons and open doors – yours for just US$12.99), high tech manufacturers and some home tinkerers are rapidly pumping out new offerings.

World War II resulted in an abundance of inventions and innovations, including rocket technology, jet engines and pressurised cabins which quickly found their way quickly into the commercial world. And the world’s first programmable computer is believed to have been Bletchley Park’s The Colossus – an unintended by-product of the Allied intelligence-gathering process during WWII.

The dual sensor thermographic camera can detect a ‘feverish suspect’ and track them in a crowd, notifying a paramedic.

While some of the current crop of inventions’ offer promise beyond Covid, there are plenty of weird and wacky offerings too. Here’s just a smattering of the offerings currently available:

Temperature scanning helmets
I’m not sure I’m ready to see my bus driver wearing a helmet, somewhat reminiscent of a fighter pilot, complete with AR headset, but  KC Wearable’s Smart Helmet is already in use globally.

The Chinese company’s helmets are reportedly being used by Chinese police, health staff and transport workers as well as Italian police and an airport in Rome, and feature a fast-scanning, infrared camera connected to an AR headset, enabling users to measure people’s temperature in real time.

KC Wearable claims the helmet can scan up to 13 people at once and 200 people in a minute with more than 96 percent accuracy. Information is stored on the helmet itself, the company says.

The helmet can connect with 5G CPE hotspots and be paired with contact tracing apps – opening up a whole new world of privacy concerns, no doubt. Adding to the nightmares for those concerned about Big Brother, the helmets support offline face and license plate recognition and QR code identification (the slightly menacing music on KC Wearable’s video showcasing the helmet are doing the company no favours either).

Despite that, the company says it’s received orders from around the world.

The Pandemic Drone
If you think helmets monitoring you are scary, don’t look up: The University of South Australia and North American drone technology company Draganfly are developing a ‘pandemic drone’. The drone is fitted with specialised sensor and computer vision systems to monitor temperature, heart and respiratory rates as well as detect people sneezing and coughing in crowds.

The University says it’s demonstrated that heart and breathing rates can be measured with high accuracy within 5-10 metres of people, using drones and at distances of up to 50 metres with fixed cameras. They’ve also developed algorithms that can interpret human actions such as sneezing and coughing.

The technology was initially envisaged for war zones and natural disasters as well as remotely monitoring premature babies heart rates while in incubators.

A trial of the technology in Westport, New York was condemned by the American Civil Liberties Union of Connecticut and has since been scrapped.

Fevercheck via CCTV
Australia’s iOmniscient has developed an automated fever scanning system which doesn’t need to be manned. The dual sensor thermographic camera can detect a ‘feverish suspect’ and track them in a crowd, notifying a paramedic and providing details of the person and their location.

The system uses iOmniscient’s AI-based analytics capabilities developed for smart cities, with the company claiming accuracy to 0.3°C thanks to its use of thermographic cameras which it claims are twice as accurate as most traditional thermal camera units.

iOmniscient says the offering would be useful in airports, stadiums, railway stations and other public spaces as well as hospitals, nursing homes and healthcare facilities.

Touchless Triage Kiosks
Another Australian initiative, this one from Melbourne-based Elenium Automation enables users to self-assess vital health signs, including temperature, respiratory and heart rates, before entering a premise.

The kiosk, which Elenium Automation says is a ‘world first’ is being trialled by Victoria’s Nagambie Healthcare, and if health concerns are detected, the user is linked to a triage nurse for assessment. It’s being used to screen employees, visitors and contractors for the community health service which operates a hospital, aged care and medical centre.

Don’t touch!
For those struggling to stop touching their face, there’s the Immutouch – a wristband that vibrates if you touch your face or come close to touching your eyes, nose or mouth.

The smartband senses hand movement and uses a personalised algorithm to track hand position. The app enables you to track how well you’re doing at keeping your grubby hands away from your face.

Exterminate! Disinfecting robots on the loose
PBA Group’s Sunburst UV Bot is an autonomous mobile robot has been set loose in Singapore.

Unlike many others we’ve seen which spray disinfectant, the UV Bot as its name suggests uses ultraviolet-C light. Using data from cameras, built-in sensors and software the bots can detect, navigate and adapt to changes in the environment and map out the most efficient routes.

With UVC used harmful to skin and eyes the robots are also able to identify when people are too close and shut off the lamp.

The company expects to roll out more than 200 of the robots across shopping malls, and healthcare and transport sectors by the end of the year.

As countries around the world look to safely move out of lockdown, expect to see more innovative uses of technology. How many of them will turn out to have the long term penetration of some of the WWII innovations remains to be seen.